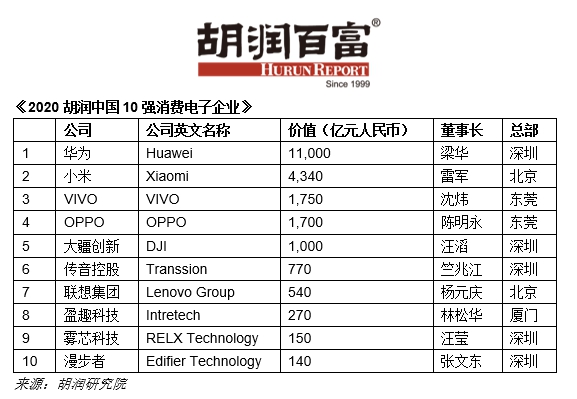 Huawei has become China’s most valuable consumer electronics company with a value of 1.1 trillion yuan. Founded in 1987, Huawei is the world’s leading provider of information and communication infrastructure and smart terminals. There are currently 194,000 employees, operations in more than 170 countries and regions, serving more than 3 billion people. Huawei is a private company that is 100% owned by employees. Huawei implements an employee stock ownership plan through the labor union, and the number of participants exceeds 100,000.

Xiaomi ranked second with a value of 434 billion. Xiaomi is an Internet company with mobile phones, smart hardware and IoT platforms as its core. The company starts with smart phones. The current product line has covered notebooks, routers, smart hardware, wearable devices, major appliances, etc., and its business has entered more than 90 countries and markets around the world. Xiaomi’s revenue last year was 205.8 billion yuan. According to Canalys’ statistics, in the second quarter of this year, Xiaomi’s smartphone shipments steadily ranked among the top four in the world, with a market share of 10.1%. 2020 is the tenth anniversary of the founding of Xiaomi. The company announced earlier that the core strategy will be upgraded to “Mobile X AIoT” in the next 10 years, focusing on the core business of mobile phones and strengthening the AIoT layout.

VIVO ranks third with a value of 175 billion. VIVO is a technology company that provides smart terminal products and services. The company has a complete design, R&D, and manufacturing system, and has built independent and cooperative R&D networks in many cities at home and abroad. The R&D scope includes 5G communications, artificial intelligence, industrial design, imaging technology and many other frontiers in personal consumer electronics products and services field. The company has 350 million users in more than 30 countries and regions around the world.

OPPO ranked fourth with a value of 170 billion. OPPO is the world’s leading manufacturer of smart devices. Since its establishment in 2004, OPPO has covered more than 40 countries and regions around the world, serving more than 300 million users. In 2019, R&D investment reached RMB 10 billion. In addition to smart phones, the company’s products also include smart hardware such as smart bracelets, watches, and wireless headsets.

DJI Innovation ranked fifth with a value of 100 billion. Since its establishment in 2006, DJI Innovation has continuously innovated technological products and solutions in drones, handheld imaging, robot education and more cutting-edge innovation fields, reshaping people’s production and lifestyles. DJI Innovations and global partners work together to open up the era of space intelligence, making the beauty of technology beyond imagination.

Lenovo Group ranked seventh with a value of 54 billion. Lenovo Group is committed to researching, designing and manufacturing a complete end-to-end smart device and smart infrastructure product portfolio, and providing intelligent transformation services and solutions for the industry. Lenovo Group is a Fortune 500 company with 63,000 employees and operations in 180 countries and regions. The company’s personal computer market share reached a record 24.5% in 2019.

Yingqu Technology ranked eighth with a value of 27 billion. The predecessor of Yingqu Technology was Malata Network Control Division, which mainly engaged in the R&D and production of Logitech remote controls. After independent operation, Yingqu accelerated the expansion of new categories and new customers. In terms of products, it gradually cut into smart homes, engraving machines, Internet of Things thermal printers and VR glasses from the original network remote control, and gradually built intelligent control components and innovative consumer electronics product. The company’s star products include the Internet of Things thermal printer (cuckoo machine), the portable version of the smart cuckoo machine MEMOBIRD GO, and the black cherry microphone.

Edifier ranks tenth with a value of 14 billion. Edifier started with the business of R&D, production and sales of multimedia audio. The company insists on developing its own brand and owns the “Eander” brand audio. In 2019, the company grasped the wave of “true wireless stereo” headsets and launched a series of products, which increased the revenue of headsets by 91% year-on-year, and the revenue of headset business exceeded that of multimedia audio business.